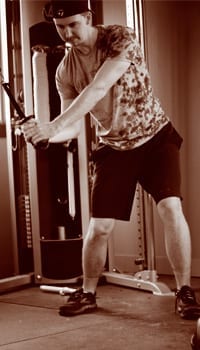 Allen Iverson’s famous ‘rant’ about practice from 2002. 7+ million views on youtube, and near the top of every Sportscentre Top 10 athlete rants of all time. Quite an accomplishment in its own right. This interview was conducted a day after A.I. was taken out of the starting line-up and forced to come into the game off the bench as disciplinary action for missing practice. At the time, he was a 3-time NBA scoring champion (he would win one more) and the reigning league MVP from 2001.  Despite his questionable attitude and ego at times, Allen Iverson was one of the hardest working players in the NBA. At 6’0 and 165 lbs he consistently outperformed other larger, stronger shooting guards in the league. In fact, he remains the shortest and lightest player to ever be awarded the title of league MVP.

But why feature a video about a player who was allegedly NEGLECTING practice as part of an article on optimizing the quality of practice? What could possibly be learned from a guy shooting off to reporters defending himself on the fact that he actually missed practice? At first look, this video might appear to be totally out of place in an article dealing with the concept of optimizing the efficiency of practice. But before we write off Iverson completely, let’s look a little closer at what he has to say and some of the ideas he expresses in this video.

First off, despite the fact that this clip is famous for how many times he says ‘practice’, Allen Iverson makes it very clear that he is all about the game. When you break it down, this press conference is essentially A.I. venting his frustration that everyone wants to talk to him about practice and “not the game where (he) go out there and die for…and play every game like its (his) last”. For someone to be that committed to dedicating his entire focus on the actual game, where his performance really counts, is that really such a bad thing?

Personally, I think it’s one of his greatest assets, and I think all great athletes share this intense focus. During his career, any time Allen Iverson thought about basketball, I guarantee that he was always thinking about how he could direct his energy to improve his performance in game-time situations. This is what makes a great basketball player, and the formula is no different for making a great golfer, or any successful athlete in general. Your ability to ensure your practice habits directly correlate to your on-course (in-game) performance is a huge factor in how rapid your progress in golf becomes.

Just to be clear, I am NOT advocating the idea of skipping practice, or in A.I.’s case, going against a team policy. What I am saying is that to get the most out of yourself you should consider taking a page from Allen Iverson, and make it an unwavering habit to focus on ensuring that everything you do directly correlates to improving your performance at playing your game (in this case golf) in its true form.

Ok, great. So we have established that all of our practice needs to have the purpose of directly benefitting on-course performance. However, without a proper plan make this happen, it is possible for our practice, no matter how intense and committed, to do us more harm than good. I am sure this is not the first time you have heard this. We’ve all heard countless clichés of ‘why’ we need to practice properly, but what is often lacking is some elaboration on ‘how’ to make practice really count. With that in mind, here are 4 strategies to maximize the benefits of practice and ensure that all time spent practicing has the purpose of directly helping performance on the course (where game-time happens):

It is an all too common habit to fall into the trap of developing practice habits that actually increase the gap between practice and actual play. In fact, one of the most common comments amateur golfers have is that they can stripe it on the range, but can’t take it to the course. They may even refer to practice as a totally different process than playing the actual game on the golf course. To make practice worth something, this simply can not be the case. One of the simplest ways to bridge this perceived ‘gap’ between practice and play is to create a method of simulating playing on an actual golf course while practicing. The most obvious way to do this is to use your imagination. For example, use various markings on the range to set imaginary fairway boarders, determine imaginary hazards, and create realistic scenarios that are found on the course. It can be even more fun to use these methods with a partner and simulate playing an actual round together at a real course you are both familiar with, all while simply hitting a bucket of balls. The most important benefit of this method of practice is that it automatically gets you focused on what you need to do to lower your scores. It sends a very clear message to your unconscious mind about what shots you need it to produce in order to create improvement. The benefit of setting this precedent for your practice habits can not be overstated.

2) Add consequence to a section of your practice

I have to give credit to my friend and colleague Dave Zibrik for this idea. While very simple, it is also quite fun and effective. Adding real consequence to your practice is a great way to help reproduce the pressure you experience on the golf course. Why is this important? Well, often when we attempt to do something at a high level, we encounter emotions and sensations that we are not used to experiencing. Being unprepared for them, our reaction to the situation becomes very unpredictable. And In the words of Dave…….

“Failure to prepare is preparing to fail”

So here’s a great strategy to mix in to your practice to help you prepare for the pressure that comes from being in the heat of the moment where it all counts. Set a plan to hit 10 shots, and establish a standard of expectation for each shot. For every shot you fail to hit up to standard, set a penalty for yourself (Dave’s penalty is usually 10 push-ups). Sometimes I like to also add a reward of -5 push ups that I can ‘bank’ as a reward for a well executed shot. The parameters you choose are totally up to you, as long as you set them to a level that is of meaningful consequence to you. By doing this, you will immediately notice over each practice shot that the familiar sense of pressure you feel during a serious round of golf will stir up inside you. This is exactly what you want. You are taking a step toward bridging the gap between practice and play. Give this method a go and you will assuredly improve your ability to handle the heat of being under the gun on the course.

Note: If the penalty you choose is physically demanding, I recommend doing this drill toward the end of a practice session. The last thing you want to do is exhaust yourself from this drill, and put yourself in a position where you have to complete a significant portion of your planned session while fatigued.

Block Practice: A method of practice where the player attempts to hit the same shot repeatedly in an effort to obtain a feel and familiarity with a new concept or idea.
Random Practice: A method of practice where the player commits to hitting a different shot (club, height, shape, target etc.) with each successive practice ball. This is done with the intent of improving a player’s ability to hit a type of shot, on demand, that they are already familiar with. This helps develop the ability to call upon any shot at any time in an on-course situation.

Each method has a place in effective practice habits. Block practice helps us to build an understanding and feel for an unfamiliar new idea or stimulus, while random practice helps establish an ability to become comfortable performing all of our skills at a moments notice. While it’s very tempting to fall in love with block practice (often without even realizing it), it’s important to recognize that without random practice, you will have a very difficult time transferring your skills from the practice area out onto the golf course. Therefore, understanding the difference between these two types of practice, and assessing which one is required to help you achieve your current practice task, is vital to maximizing the efficiency of your practice.

4) Pay attention to your pre-shot routine when you practice

Most of understand the value of a pre-shot routine on the golf course. We see PGA Tour players instill routines that lock them in to their process with such conviction that they appear to be unaware of anything else. Indeed, a pre-shot routine is a vital key to tapping into to the familiarity and confidence a player has earned through hours and hours of practice at honing their craft. Like anything else you want to be able to execute properly when it counts, a pre-shot routine needs to be practiced. Granted, with a bucket of balls sitting right next to you on the range, it is easy to fall into the temptation of hitting shot after shot in an effort to get in as much repetition as possible for the block of time you have available. However, in doing this, you are neglecting to replicate the process you go through on the golf course, which can and should include a pre-shot routine. Truthfully, if you want the work you put in practicing to transfer onto the golf course and in competition, a consistent pre-shot routine is one of your biggest allies. But for it to work, you need to connect it just as diligently to your practice shots as you do to your playing and competitive shots. So make it a habit to include it in your practice sessions. You’ll hit less balls than you’re used to for your average block of practice time, but the productivity of your practice will go through the roof, and it will manifest itself much more seamlessly into your performance on the course.